It can't be Christmas without the Carrow Cup, which will be held on Saturday 7th December on the river Wensum in Norwich. This year's entries in the "Traditional" boat category are:

The river festival at Orléans on the Loire is held every two years. This year boats from the Thames and elsewhere in England were invited and Cherub, a double skiff built in Richmond upon Thames in the 1890s, was included.
Posted by Adrian at 03:59 No comments:

Once again crews from far and near met in Norwich for the Carrow Cup Race on 8th December. Blades Rowing of Dartmouth made the long journey from Devon to defend their winning position in 2018. Crews from Benfleet, Lower Thames, Blakeney, North Norfolk Gig Club and Norfolk Skiff Club were ready to row over the traditional course from Bishop Bridge in the heart of Norwich to Broadland Boat Club in Thorpe St Andrew.

On the second Saturday in December every year, Norwich Rowing Club invites rowers in fine and traditional boats to race on the river Wensum, continuing a tradition, which started in the early years of the 19th century.


The (second) Carrow Cup Trophy, originally presented in 1813, is awarded to the fastest four oared boat. In 2013 The Norwich Society gave a new trophy for the fastest "traditional" boat on handicap and it was this fine silver bowl, The Bi-Centenary Trophy, which would be the prize.


The weather was blustery, but dry. Under supervision of the starters and marshals from Norwich Rowing Club, the crews were set off at intervals, because the course passes through bridges and narrow sections of river in the first few hundred metres.


Once past Carrow Bridge the faster crews were able to overtake the slower. Blades, who had started first reached the finish line without being overtaken. Benfleet in Rozinante
charged impressively through the fleet to finish first on corrected time.

The Warns family in Seraph put in a good time, gaining a place for Norfolk Skiff Club. This year Blades had to settle for second place.

Lower Thames approached the event in the right spirit, reserving enough energy to continue rowing past the finish line. They were booked in for a Christmas Dinner at The Ferry House in Surlingham.

If you are interested, the results can be seen on the South East Coastal Rowing Forum Facebook page.


It was cold, cold, cold on the River Wensum for the 2017 Carrow Cup Race on Saturday 9th December. Hardy crews from the local rowing clubs were joined by visitors from Dartmouth, North Berwick, Southend, Leigh on Sea, King's Lynn and Blakeney.

Numbers in the traditional race, for fixed seat boats without outriggers, were slightly reduced this year, however ten assorted skiffs and gigs mustered by Bishop Bridge, built in 1340 and witness to Carrow Cup races going back to the early 1800s.

As before the "traditional" rowers compete on handicap for the Bi-centenary Bowl, which was given by The Norwich Society in 2013 to encourage use of the River Wensum in Norwich and to commemorate the 200th anniversary of the existing (and second) silver Carrow Cup.


In the event, Blades of Dartmouth, who had made the long journey from Devon were too strong for last year's winners, Lower Thames Rowing Club, and for the North Berwick pair, who were beaten into second place. The 30 second winning margin appearing to contradict the neck and neck struggle witnessed by spectators on the bank.
Southend junior girls put in a good time amongst senior (and in some cases very senior) opposition.


The local Derby between Blakeney and King's Lynn in their St Ayles Skiffs was won by Blakeney, but King's Lynn had a deserved place on the podium for their Christmas Fairy costumes. Perhaps rowing in wings was not an advantage.


Vanessa Trevelyan, chair of The Norwich Society, presented the Bi-centenary bowl to the Felton Flyer crew and David Bolton, chairman of Norwich Rowing Club, invited everyone to return to Norwich for The Carrow Cup 2018.

The name of Blades of Dartmouth will now join those of Lower Thames Rowing Club and Langstone Cutters Rowing Club on the silver bowl. 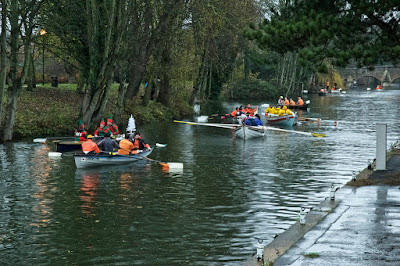 Nights are drawing in and, as temperatures fall, the autumn calendar proceeds from Halloween to Guy Fawkes Night, Advent and Christmas.
But, for rowers there's another important event to be remembered, The Carrow Cup, when crews in a variety of ancient and modern boats take to the River Wensum in the shadow of Norwich Cathedral to race for The Carrow Cup and Bi-centenary Bowl.
Once again Norwich Rowing Club has invited traditional boats to compete for the trophy given by The Norwich Society for the bi-centenary of the Carrow Cup in 2013.
This year the event will be held on Saturday 9th December. Further details will be available later.
Posted by Adrian at 14:17 No comments:

Here is the result of the 2016 Carrow Cup Traditional Boat Race for the Bicentenary Trophy. 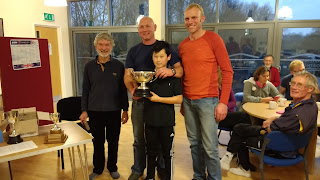 Once again Lower Thames Rowing Club swept the board taking the first three places in the sixth year  in modern times that "traditional"boats have taken part in this historic event. The traditional course follows the rivers Wensum and Yare through the centre of Norwich, finishing at Thorpe St Andrew. Jonathan Hooton, chairman of The Norwich Society, presented the impressive silver bowl, which had first been given by the society in 2013 to mark the bicentenary of the Carrow Cup Race. 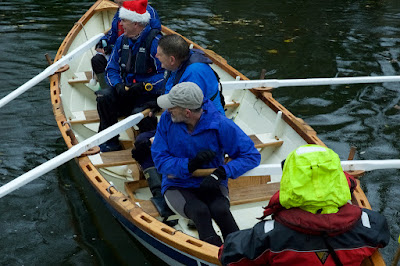 The Carrow Cup Race, now in its 203rd year, will be held on the River Wensum in Norwich on 10th December 2016. For the 6th year Norwich Rowing Club has invited traditional rowers to bring their skiffs, galleys and gigs to the event. The traditional boats will muster at Pull's Ferry, in the shadow of Norwich Cathedral, at 11.30 a.m.

Lower Thames Rowing Club will be bringing 5 boats to defend their successes in 2014 and 2015, and  the Norfolk clubs will be there to give them a run for their money. Both King's Lynn and Blakeney will be sending St Ayles Skiffs and The Norfolk Skiff Club will field a skiff and a Norwegian Faering.

There's still time to register and I hope that the other clubs from this region and elsewhere will make the journey to Norwich for this traditional start (if you are a rower!) to the Christmas season.
Posted by Adrian at 05:04 No comments: